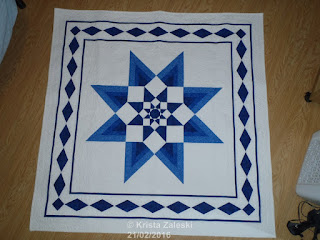 I have a finish this week, of a fairly old UFO.  I made this quilt a couple of years ago.  I originally designed this pattern back in June of 2011 and made my first top from it.  Eventually, I decided that I wanted to publish the pattern, and that of course required making it a couple of more times, to test the instructions. Two tops were finished in May of 2012. I finished the second quilt in Feb of 2013, but the third has been hanging out in the "to be quilted" pile since it was completed.

Finally last weekend I got it on the longarm. I wanted to play with some new feather techniques, and it seemed like a really good choice for that.  Finished binding it this week, and now it's done! 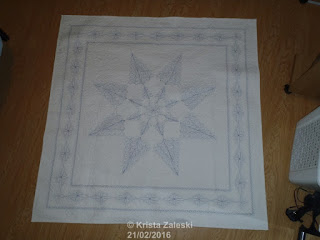 I particularly love the way the back turned out - almost like a wholecloth quilt in two colours. 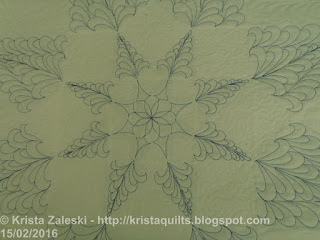 And the center of the star came out better than I expected.  It's one of the few places I did not feather - the segments were too small for that to work. So I did a simple curved design following the piecing, and this is what the back ended up like.  A (happy) surprise). 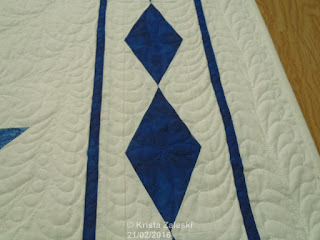 Here's a closeup of some of the feathers around the borders.  And the backside of that. Again, no feathers in the blue sections, but I love what came out. All of this quilt was freehand quilted, with no marking at all. 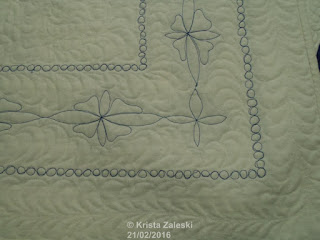 My stash report for this week is pretty simple.
4 yards - backing for Paris
1/2 yard binding for star quilt

And would you look at that - I'm officially in the black!
Head over to Patchworks Times today for more stash reports.

I'm also linking up at WIPs be Gone today.