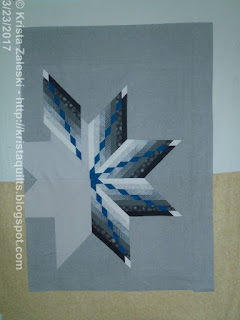 And it's done!  Star in progress is a finished top! And if I really move my act, it will be quilted and submitted for the Ottawa Modern Guild show at CQA. I found a backing, so all that is a lacking is my time. Submissions are due tomorrow ... 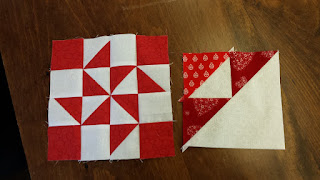 I was chugging along quite nicely, catching up on my 150 Canadian Women quilt. Then I pressed a couple of them. Pretty sure these are both supposed to be 6"blocks. That 8" block on the left is going to have to try again.  :(
2 comments: 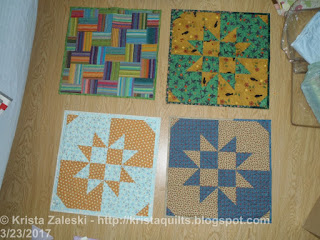 It's been a long time since I could claim true finishes from all of my UFOs. These poor little quilties have been sitting in my sewing room, all quilted up and just waiting for binding, for at least 6 months. It's about time they got some attention, so this past week I went on a binding blitz and finished all of them (plus a couple of other projects I found buried in the stack).

The top left is leftover bits from my Kaffe Fassett handkerchief quilt. I have a ton more leftovers to use up, but this was a quick trial during a retreat last year.  Sufficient for a quiltie, but not something I want to do for a large quilt. The rectangles are about 4x6" each, and the whole thing is done with partial seams to make use of irregular sized bits and pieces.

The other 3 are Disappearing Hour Glass blocks.  Each is made from 2 fat quarters, and I discovered that Canadian fat quarters are perfect - two 20" squares results in a 24" block.  The American fat quarter only gave me 18" squares to start with, so I had to add a small border to the finished block to bring it up to the required 24" top.

Bindings on all of these are scrappy, from my binding bin - the tub I throw those final bits of binding into when a quilt is finished.  So this picture is entirely made from my stash/scraps.
1 comment: 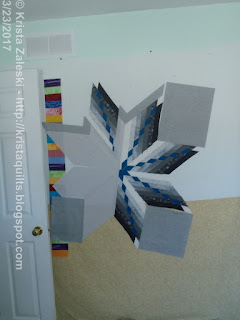 This is what's on my design wall today.  I was digging through my scrap bins, and found the bin of leftover bits & pieces. It contains all the partial blocks, pieced strips, and other miscellaneous bits from various quilts that I've made over the years. This particular set of fabric (if you ignore the coloured piano key sitting there) is from a star quilt I made about 3 years ago. I had enough left in each of the strips to make 5 more star points. So then the question was, what to do with 5 (rather than 8) start points.

I played around a bit; seriously considered tossing one point and using just 4 (a much easier number to make an arrangement with). Then it occurred to me to 'build' the star. I put together 4 points, 3 blank sections, and one section that is supposed to look like it is floating into place.  We'll see how it looks once I have all the pieces cut out.

I am using the leftovers from another (unfinished) quilt for the background. I sure hope I didn't need any more of that.  Linking up with Judy today.
No comments: 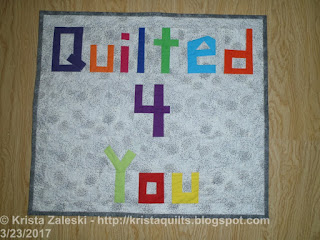 A while back I started to hang quilts in my front window. Initially, it was decoration (I have a Hallowe'en quilt, and a Christmas quilt which I put up seasonally). But customers mentioned how easy it was to find my house, when those quilts were displayed. So I contemplated the idea of a quilt for every month, or maybe more realistically for every season. But that project never seems to gain much traction. So I decided that a quick improv-pieced banner would be a good place to start.

I made the top one day at a quilt retreat. And finally got it quilted last week along with a bunch of other little projects that have been sitting around waiting for attention.

I was playing with some leftover bits from my Bonnie Hunter "en Provence" quilt recently.  They've been working their way through the system, as leader/enders for some other projects I'm trying to finish up.  But when I put them up on the wall today, I see I made a small mistake.  Oh well, 7 out of 8 isn't bad :) 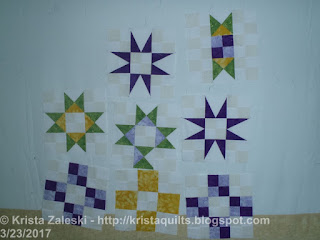 Next step - figure out what to do with these little leftovers.  8 12" blocks won't make much of a quilt on their own. 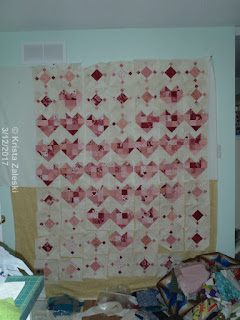 I've been working on a mystery quilt from Love Shack quilts since last October. The basic blocks and layout were finally revealed a couple of weeks ago. The blocks were set in an alternating pattern. I looked at it, and thought I'd like to try something different, so I arranged my blocks in this layout.

It didn't really work for me, because the large heart was not as visible as I had hoped it would be. But I liked hte idea, so I did some playing around on EQ with alternatives. 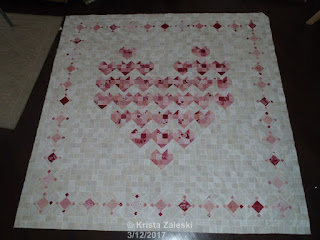 I came up with this layout, which I definitely love! However, it required a "few" additional blocks.

I spent the past 2 weeks making 9 more border blocks, 50 neutral 16-patch blocks, and 46 neutral 8-patch blocks (for the outer border). I wasn't sure I'd ever finish, but strip piecing is your friend and I managed to get everything done.  I'm pretty happy with the result. Now it goes into the pile to be quilted - and to find a backing for this 96" square quilt. 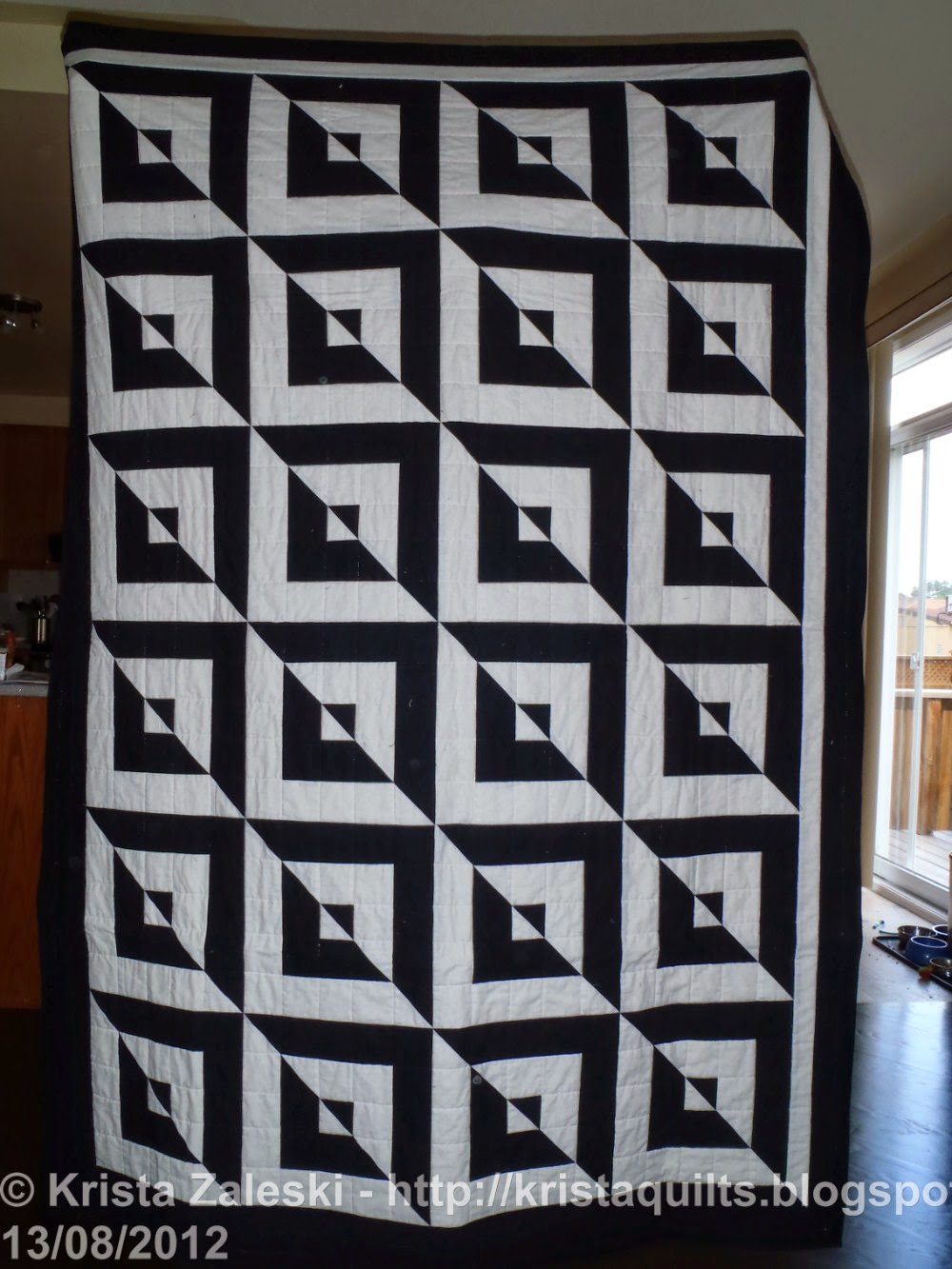 A few of my quilts have apparently never made it onto the blog after they were completed. This is a "catch-up" post for those. First up is "Contrasts". I made this quilt in 2011, when I had a dream that I might publish a book of quilts. My idea was a series of quilts that were "stitch and slash". Similar to a disappearing 9-patch, a quilt block would be made and then cut in some fashion to create a new, more complex-looking quilt block. Contrasts was my first attempt. A simple block of 3 concentric squares, cut on the diagonal.  I like the final effect, although the placement of some of the seams was awkward in the end result. 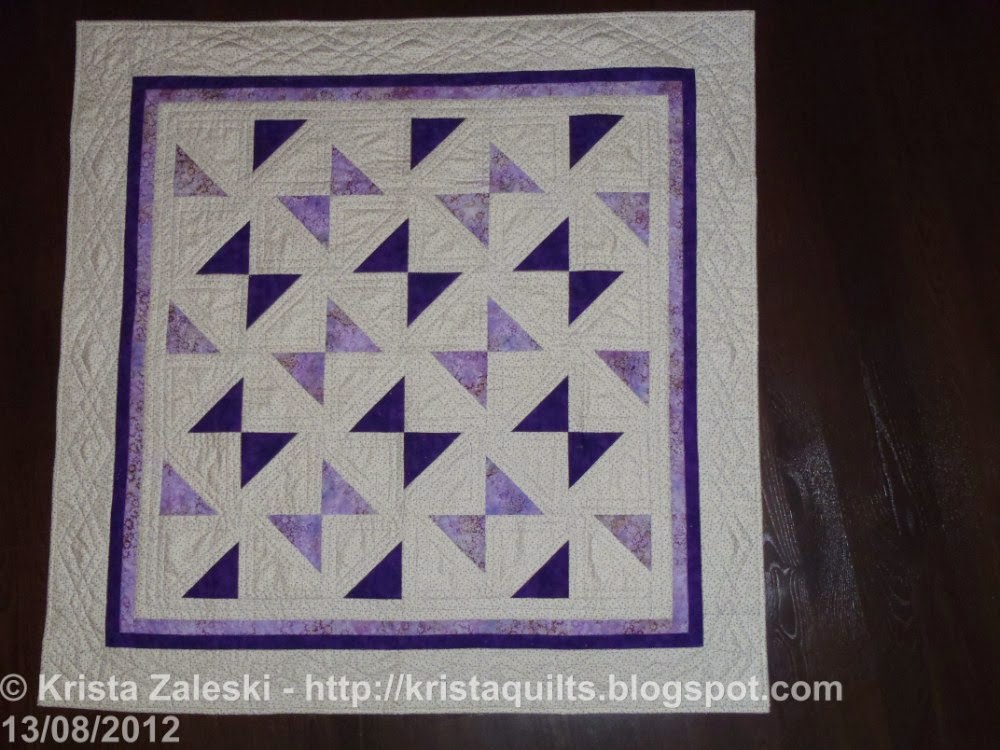 This quilt was named "Time Flies" - I felt that it looked like hourglasses set on angles, flying through the air.  I made it by creating large snowball blocks, then cutting them in quarters. That step probably wasn't necessary, as simple squares with one corner snowballed give the same effect. 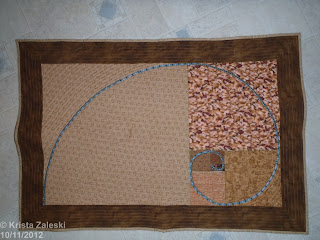 This is my fibonacci spiral, from way back in August 2011.  I have the photo, but it doesn't seem to have made it onto my blog in finished form. So, I'm just cleaning house here.  The original post about this quilt is here. 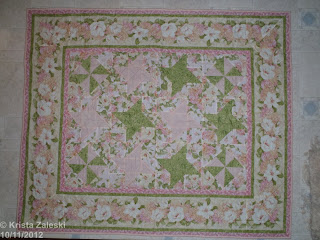 And this quilt was an effort to use up scraps that were hanging around from another project. It didn't quite come out as I had hoped. The pinks blended into the background too much.  But it was finished and sent off as a donation. 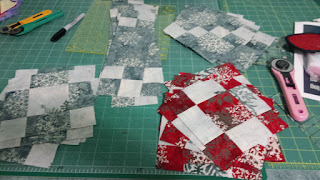 Why is it that all the mystery quilts seem to start at the same time.  I have 3 going on right now. -  2 from guilds,  and one online.  And I know that Bonnie Hunter's mystery will be starting in a few weeks. Maybe I can avoid getting sucked into the New Years Day mystery overload I've done the last few years. The current mysteries are somewhat long term,  running until the spring,  so they should not be too much work each month.

These are my blocks from one of the guild mysteries.  The dark is my background,  and the light is my accent colour -  so I keep having to remind myself to switch the dark and light in the instructions. 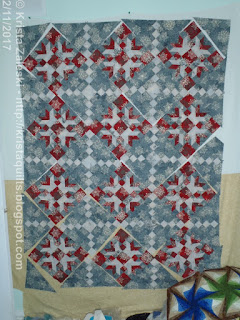 As this quilt progressed, I realized that my choice of fabrics was somewhat unfortunate.  The light grey has dark grey in it. The dark grey has light great. And the red has both dark and light grey highlights.  I did some fussy cutting, to try to minimize the overlap between the greys. But in the end,I think my blocks look a bit mushy.  However, I did decide to go with the original layout, with no border. That makes this another perfect donation quilt, and I'm sure someone will love it.  It's all sewn together now, although this picture doesn't show that.  Added to the pile for quilting.

Last May I started this project. I thought a "plus" quilt would be a great (and quick) way to use up scraps, and give me a bit of a mental break from the Winding Ways quilt I was working on at the time. 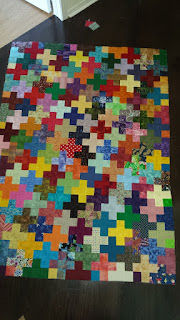 However, I should have finished the math on this before I started. I just wanted a 50x70" lap quilt, to donate to Victoria's Quilts when it's done.  Simple enough, right?  So I pulled out my 2.5" strip bin, cut a bunch of fabric into sets of 5 squares for the pluses, and started piecing it together.  Then I thought about where this was going.  50x70", at 2" (finished) for each square = 25x35 = 875 squares. Oops.  And, 5 squares per colour means I need 175 different fabrics (actually a few more, because there are partial pluses on the edges of the quilt)

I did manage to finish the quilt, complete with almost 175 different fabrics. And finally this weekend I am going to put it on the longarm and have some fun with it.  As is typical, it does not feel as though I made even a dent in the pile of 2.5" strips in my scrap bins.
2 comments: 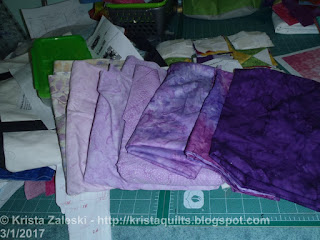 I spent a couple of hours yesterday digging through my stash trying to find fabric for my next project.  I started with this. I bought these purple batiks, along with a couple of coordinating prints, a few years ago. I love the colours, but after looking at this for a bit, the fabrics all started to blend and it seemed too blah. 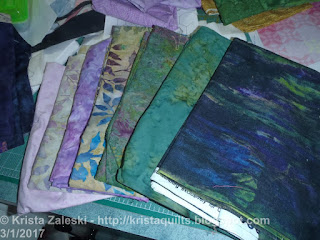 So, back to the closet, and more fabric came out.  Maybe some greeny-blues and the other coordinating print to spice it up a bit.  Unfortunately my greens are too green, so this didn't feel quite right in person. And I am determined that this quilt will come from stash, so no shopping allowed. 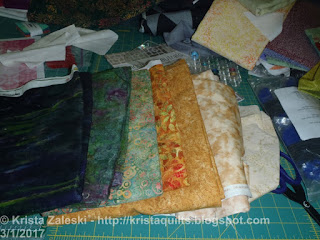 A new direction. I started with the leaf print in the middle and worked out from there. Not bad. However, I'm a bit short on the leaf print :( I think I can fake it - I have another batik in a dark gold that might pass for the leaf print if carefully placed in the design.  And if that doesn't work, the quilt just gets smaller :)