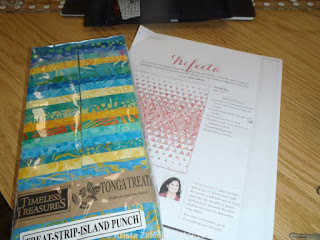 I saw this pattern - Trifecta - a couple of times recently. Once at a quilt show in May, and then a couple of months ago when a customer brought me one to quilt.  I absolutely love it, and knew back in May that I was going to make that quilt.  And that was reinforced when my customer dropped hers off. But it is so big -about 90" square - and I just don't need another giant quilt in my house.

So, rather than give up on the dream completely, I decided to downsize it and see what I could do from some precuts in my stash.  The original pattern uses strips that finish at 1". I originally considered using a jelly roll, and cutting each strip in half. But those would finish at 3/4", and it was still going to be a pretty big quilt (about 70x70" and my jelly roll would obviously not be enough fabric for it). So, a bit more thought, and I decided to cut each jelly roll strip in 3 pieces, 3/4" each. The resulting strips would finish at 1/4". 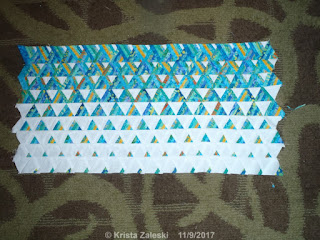 Never one to shy away from a challenge, I packed up my jelly roll and a bunch of white fabric and headed to a retreat.  Some further math suggested I only needed 1/2 of the jelly roll to make the miniature version of the quilt - which was perfect, because my jelly roll included 2 of each strip.  I spent the first morning at retreat cutting itty bitty strips. And then sewing them all back together again, in sets of 5.  Using a techinque I learned recently at class - to follow the previous stitching line, rather than the raw edge, when sewing a 1/4" piece - I managed to keep the strips all relatively straight and even. 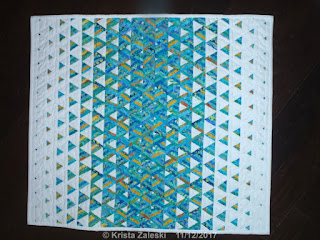 Cut into the cutest little equilateral triangles you have ever seen (about 1 1/2" on a side), and from there, assembly was pretty straight forward. Simple in-the-ditch quilting was perfect for this quilt - which finishes at 20x22".