There were several suggestions on my borders for the mystery quilt I showed on Monday.  Some people thought I should scrap the pieced border - I just can't do that, for two reasons.  First, it is part of the quilt design.  While I don't mind modifying colours, I don't really like the idea of scrapping a large part of the border which was designed for this quilt.  But, I have done that in the past. I think the bigger issue is - there's  a heck of a lot of work in that border :) 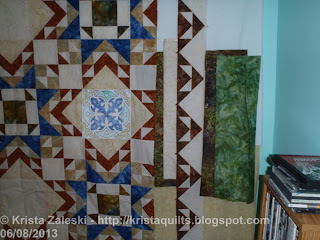 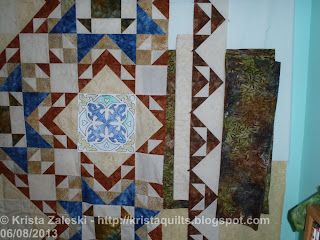 I did come up with a couple additional thoughts today. I think I like the second one of these best, and will probably go with that.  The green gets tossed, but I like the way the multi-coloured fabric works in the two border positions, better than the dark brown.  I also added an applique that I am thinking of including, which picks up the blue and multi-colour from the star blocks, and adds a touch of the green..  The large plain square seemed out of place to me, so I thought I would add something.  This was inspired by the Ricky Tims presentation I saw last Thursday, where he talked about his applique.

linking up for Work in Progress Wednesday, over at The Needle and Thread Network and at Freshly Pieced.