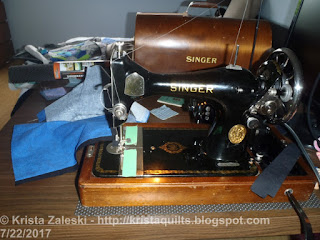 I can finally post about this quilt!  Last June my sister sent me this gorgeous 1937 Singer - in perfect working order, once I replaced the belt and power cord.  So I thought an appropriate thank you would be a quilt, pieced on that very machine.  Shortly after, I was at a quilt store and saw a Tardis quilt pattern. It even had printed panels for the police box (avialable on Spoonflower, as per the pattern), which had been included by the shop. My sister is a huge Dr Who fan, so I knew that was the quilt I'd make for her. 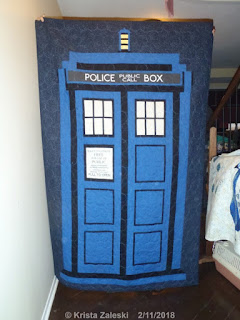 A pile of fabric later, I headed home and started sewing. I was thinking it could be a Christmas gift - but business picked up for the holidays (of course) and this poor quilt remained a top until January. Fortunately, her birthday is in February, so I figured I could easily finish it in time for that. Just needed to figure out the backing for it. 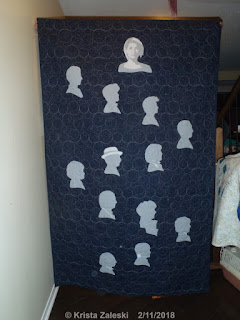 And then Jodie Whittaker was announced as the 13th doctor - and my sister was thrilled! So of course she had to become part of the quilt.  I decided to make the backing using pictures of all 13 doctors.  I found profiles of the first 12 doctors online, but no one had done one of #13 yet.  I finally found a decent front shot of her in costume and decided to tackle it myself. I converted the photo to monochrome, and appliqued it in 2 colours.  At first I thought I'd place the doctors top down, all in profile. But I quickly realized that Jodie needed to be top and center - so the rest of the doctors weave up towards her instead.

Finished, bound and sent off with 1 week to spare.  Canada Post however decided it needed to be 1 day late.  But I think she likes it :)  Her facebook this morning says "MY AMAZING SISTER JUST SENT ME THE BEST BIRTHDAY GIFT EVER!!!"