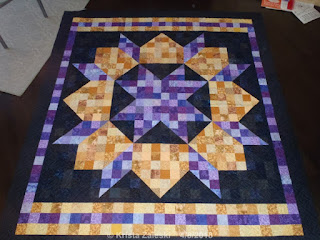 This quilt started as a quilt-along on the Quilting Board. A giant scrappy swoon block, made from 3" squares of fabric.  I dug into my purple and gold fabrics, and managed to get the center block completed.  Then I realized that a 76x76" top wasn't all that useful to me, so I added some borders to turn it into a rectangle that would fit my bed. 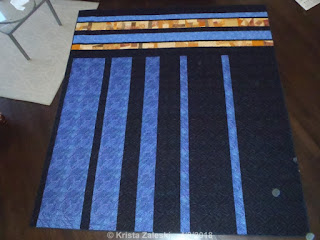 The backing was a saga in itself.  First attempt was the completely wrong size, because I forgot I'd added the borders to the quilt and didn't bother to check before making the backing.  Second attempt went much better, and resulted in the backing seen here. The purple/black stripes are arranged in a fibonacci sequence.  The gold stripes at the top are made from all of my gold scraps - sewn together randomly to make a strip of fabric long and wide enough for this border.


May 1 Update:
My April UFO (#5) was already done, so I pulled this one from the "missed" list for one of my UFO challenges, and decided to finish it up for this month.  And Bonus - it is the UFO drawn by Judy over at Patchwork Times for May. So a double finish :)  I'll pick one of my other misses - either my Kaffe quilt, or 150 Canadian Women - to finish this month instead.  And in the meantime, I'm linking up over at Patchworks Times.