"All Wrapped Up" Christmas Tree 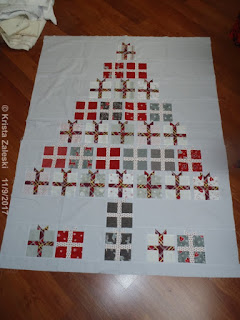 I'm on a bit of a Christmas kick around here, which is appropriate given the time of year. I have a few Christmas projects from past years that have been languishing for a while, so I pulled them out to finish up.  Number one is my All Wrapped Up Christmas Tree.  The block pattern in this quilt is "All Wrapped Up" from Missouri Star Quilt Company.  I did it in half-size - using 5" squares cut into quarters for the presents.

When the blocks were made at a retreat last November, I knew I didn't want to set them in a standard rectangular setting.  I had 36 blocks, but a 6x6 layout just seemed boring.  So I played around for a while and realized I could make a tree out of them. A few hours later, and some input from my retreat friends, and I had a Christmas tree with a few packages underneath. 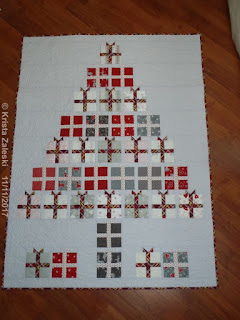 I came home from retreat all inspired, and even bought some more of the ribbon fabric for binding. And then I put the tree away and ignored it for a year.  Pulled it out last week, dug out some backing for it (a grey flannel that I had bought for another project but changed my mind about), and loaded it on the longarm.  I knew this quit deserved custom quilting, so after some thought I settled on stars and swirls in the background, and outlining the packages and ribbons for the rest of the quilt.

Done and ready for use, in plenty of time for this Christmas. 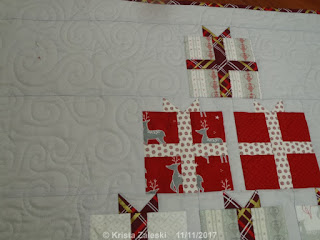