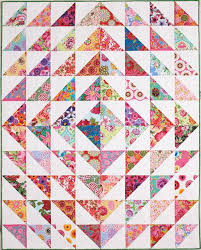 This quilt top has been on a journey. 2 years ago, I won a block draw at a quilting retreat. Everyone at that retreat made 2 blocks. They were large (9") half square triangle blocks, with Kaffe Fassett fabric in one half and white in the other.  I loved the fabrics, but the quilt top seemed a bit too simple for my tastes, so I decided to modify it. This was the original pattern. 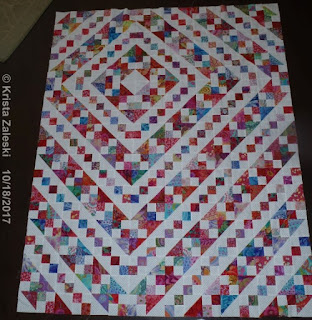 I knew what layout I wanted, and realized (half-way through making blocks) that it takes 2 slightly different blocks to make it. Fortunately, I figured that out before I got too far, and ended up with just the right number of blocks.  I decided an offset design would be a bit more interesting than centering it.  I tried to keep the arrangements random, mixing fabrics with each step of the process so no two blocks are alike, and (almost) no two identical fabrics are side by side.

The quilt top ended up 56x70". I think a border is needed, so I'll have to find a Kaffe Fassett fabric I like for that.