And when they aren't well laid, they go even further awry.  Attempt #2 to use the new swoon backing I made involved this quilt, with some added borders.  I measured it at 79", so adding coloured borders (5" on each side) and a large black border would bring it out to about 105". That would be perfect to quilt as a backing for the 96" swoon top. Then trim the extra-wide black borders, and I'd have a reversible quilt.

I headed to a sew night with the fabric and a plan.  I didn't relish the thought of fighting with the whole top 16 times to attach all those borders, so I decided to mitre them. That way, I just dealt with the smaller strips until the very last step. 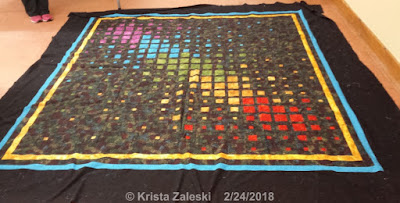 As I started to attach the first border section to the quilt, it didn't fit!  Well, actually it did fit, but just barely. I had used width of fabric (which was 43") and attached on diagonal, so I should have had about 84" - plenty to fit my 79" top with some left over.  So, I dragged the whole thing out on the floor, borrowed a measuring tape, and checked my measurements.  79x83"  Oops. That's not a square quilt.

Changing direction on the fly, I decided that was OK, I would not mitre the borders, but they should still fit since I had enough "extra" on the short edge to cover the length needed for a square corner.  I continued to sew my heart out, and got all the borders attached.  Then I laid it out for a photo session, and started really thinking about my plan.  Backing for a 96" quilt.  I now had an 83" quilt with 10" of coloured border (5" on each side) - which made 93" before the black started. And the other quilt is only 96" in total. Which means I'd have 1.5" of black outside the coloured border on two side (and close to 5 on the other two, which was what I wanted originally).

I tried desperately to convince myself that I could live with this. But driving home I realized that I could have easily squared up the top by adding 2" to each side (I had that fabric with me).  At the time someone suggested cutting the wide side down, but I refused to do that as it would have removed some of the pattern. But for some reason I never thought of adding fabric to square it at that point.

So, during my 15 minute drive home, I figured out that if I squared it up, put only 1 coloured border and ended with black, I'd have a much better match for the "other half" this was trying to match up to.  So, before I could change my mind, I grabbed my seam ripper and the quilt when I got home and removed the borders.  And now it awaits more sewing to put them back on in a different configuration.