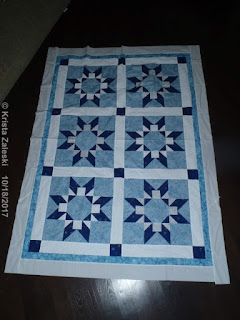 I was given 14 blocks that were made by the friend of a customer. She asked if I would be willing to finish them into a donation quilt. Of course I said yes. The package included some extra fabric of each of the fabrics used in the blocks.

The blocks were big (16") so I knew they'd make more than 1 quilt. And 14 was an odd number to start with, but I sat down with Electric Quilt and played with a few layouts. In the end, I settled on these two. One with 6 blocks in a straight setting. And one with 8 blocks set on point.

A weekend quilt retreat was just right for finishing these up into donation-sized projects.  It's not immediately obvious, but there were 2 different whites used in the blocks.  5 of one and 9 of the other.  So decision number 2 was how to split those up.  After some discussion at the retreat, the consensus was: 2 of the odd blocks in the center of the on-point quilt, and 3 in the other to give a sort of checkerboard layout.  In the photos, the white is just slightly brighter in those blocks. 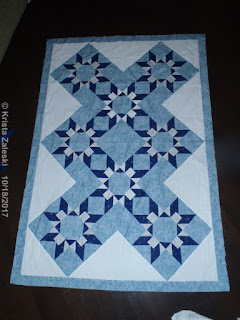 I added the inner border on the first quilt from my stash, but everything else came from the bundle I was given. I'll use the last little bits of fabric to make pockets for the bags that we'll use for the donations.

Now to get these into the queue and quilt them before my next guild meeting.