Since this was my May UFO, I'm linking this post up to Judy's UFO challenge today (May 31).  I had hoped to have it quilted, but I guess a completed top is better than nothing, and much farther than I was at the beginning of the month. 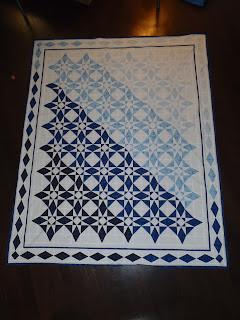 Fresh off the design wall - my son's quilt top is now complete.  I am now officially DONE with diamond borders.  At least until the next time :)  After making 2 of my star quilts, and this one, I have had enough of those diamonds.

This top was intended to reflect waves washing up on shore, with the lighter blues being the shoreline.  Originally I tried to also include a setting sun, but I decided I didn't like the effect so took it out.

The quilt is 95x75, sized for my son's bed.  It ends with a dark blue border (hard to see on the dark floor) and will be bound with the same fabric (assuming there is enough left on my cutting table for that).  I considered adding a cream border all around, but I kind of like this effect. 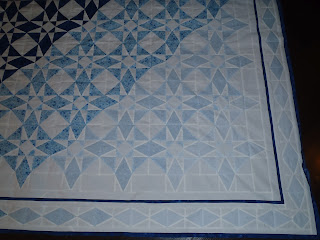 I'm thinking about quilting it simply with wavy lines following the direction of the waves, but I haven't completely decided yet.

There is one spot in the border where I'm not 100% happy with the way the colours line up.  But after trying without much success to get a good picture of the "issue", I decided that maybe there is no issue after all. 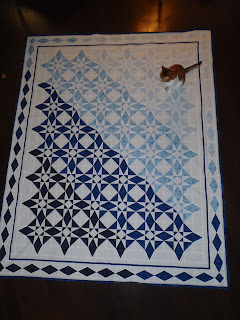 It is "quilt inspector approved", and now goes into the "to be quilted" pile, which is becoming quite a mountain. I really need to get a handle on that soon.