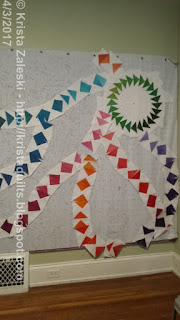 Awhile back I made a quilt from some ombre fabric, with a lot of flying geese. I had a few leftover, plus a lot of the fabric which I ended up not needing for that quilt. It has been sitting in a nice little pile since then, and last weekend I pulled it out.  I had a vision, of making flying geese curving across the quilt, so I decided to make up the rest of the fabric as geese and see what I could do.

First, I made the green circle seen here, thinking that I would make 2 or 3 of these in various sizes. Well, starting with finished flying geese and trying to place them into a circle was a less-than-optimal idea.  It took a lot of time, and a lot of piecing of background fabric, to make this work. So I decided there will be one circle only. 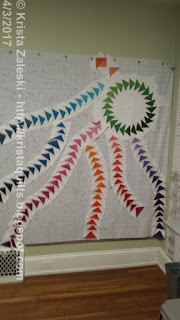 I tried a few swoops of flying geese for the rest (in this first photo, the geese are still attached in pairs, from the "4-at-a-time" flying goose method). I'm not sure I'm thrilled with the end result.  The second photo has all the geese trimmed at various angles to make the swoops. But I'm not getting the feeling I was hoping for from this. So I packed it all up and I'll get it up on my design wall later and see what I can do with it.

The idea here was the geese flying into the circle. But I think I'll scrap that idea and try for general swoops across the fabric around the circle next time I pull it out.