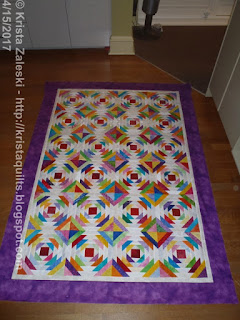 I've been working on this top for quite some time. I bought a pineapple ruler on a whim one day, because I always wanted to make a pineapple quilt and it seemed like a good way to start. I was using it as a leader-ender project for a  while, because making 24 pineapple blocks all at once was just too repetitive for me.  But evetually I just wanted it finished so I moved to the top of the list and found another leader/ender to go with it.

24 blocks were finished and I thought it was done. Then I realized that the blocks finish at 10", not 12", so the top was going to be a bit short of donation size. I set it aside for a while, but it lept into my retreat bag last month and I tossed some border options in with it. Assembled and bordered, it's now ready for quilting.

I like the result, and hopefully the recipient will like bright colours :)  But I have confirmed one thing - the 10" ruler is about 2 rounds short of making a really good pineapple block. I would have liked the white sections to be a bit more prominent and I think 2 extra rounds might have done that for me. So my next pineapple quilt (yah, right) would be done differently.