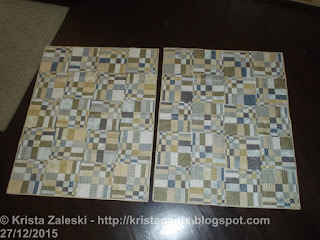 While I was assembling a list of my quilty achievements this year, I realized that I neglected to photograph a couple of my projects. These 2 quilts are from a pattern in "Modern Neutrals".  The one on the right was the original, following the directions for placement of the light & dark neutrals. But as I assembled it, I decided I didn't like the arrangement - the illusion that was supposed to come through in the pattern was not working for me. So I decided to cut the second have of my strips in the reverse colour placement, with the light fabrics in the large squares.  I think that (the one on the left) shows the pattern more clearly, for the fabric I chose.

In the meantime, I have been busily working away on Bonnie's latest clue, and have about 1/2 the units assembled for this step.  And, as a bonus today, Merry Mayhem sent a sneak peak for the New Year's Day mystery, so I can get started on that in the next day or so, too.  She says it means we can sleep in on New Year's Day - but in my case it just means I'll have time to get started on my other NYD mysteries first thing :) 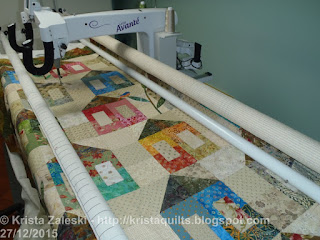 And I'm working away on my longarm, quilting houses. This is a quilt made from blocks & fabric I won at a retreat in November. The top was assembled at the retreat, and I hope to have the quilting done before the next guild meeting.  Each house is getting one of 4 slightly different quilting treatments.