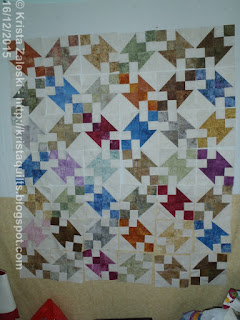 I guess I'm a bit late for design wall Monday this week. Heck, I just realized it's not even Tuesday anymore. But, I have been working in my sewing room this week. Finished a bunch of blocks for a new quilt. This started as a leader/ender some time ago, but I got tired of trying to keep track of all the bits, so I made it my main project recently. 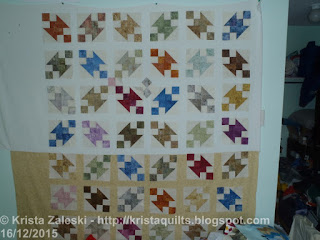 Originally this fabric was for a kit, but although I love the fabrics, I didn't like the quilt design. So I decided to go my own way with it.  The fabric (charm squares) made 42 blocks - just enough for a decent layout.  I considered several options, but decided on the second one here, partly becuase it makes the quilt bigger, but also I like it more.  I'm going to add sashing with squares in the center of the stars, and on-point squares in the centre of the on-point boxes.  Hopefully I have enough fabric for that plus some borders. 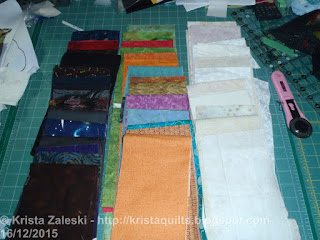 I also jumped into another mystery quilt. Looks like I'm going to repeat last year.  Merry Mayhem put out her fabric requirements this week, so I pulled some bits from my (nicely cut) scrap bins and found enough to make the scrappy version. I'll figure out borders later.  Lights, mediums, and darks. However that red may have to go, or else it needs some more friends and fewer brown/blacks.

I'm linking up at the Needle and Thread Network today.