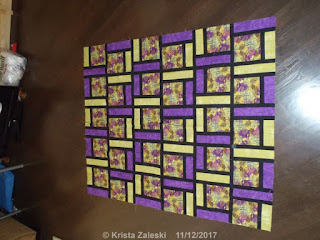 I am determined to make a dent in my stash this year. I'm not saying I won't buy fabric, but I'm going to look at stash first for anything I want to make, and I'm going to pull out some of those old "bundles" of fabric I bought way back when and figure out a plan for them.

This fabric has been holding court in a bin for years, waiting for the right pattern to come up. I finally pulled it out and dragged it to 2 retreats at the end of last year.  No go, at the first retreat. But at the second I was scraping the bottom of the project barrel, and it was either this, or work on my 150 Canadian Women quilt and I did NOT want to do that one.  So I brainstormed over breakfast with my table mates, and googled a few options. To be honest, in retrospect I'm not exactly sure where this design came from. I think it may have been inspired by "Magic Tiles"  I did some quick math, came up with a block ratio that I liked, and cut a whole pile of fabric.  The size and number of blocks was defined by the amount of print fabric I had. The rest just fell into place.

It used every bit of black I had - so I had to stop here. I think the quilt needs borders - a narrow black one, followed by whichever fabric I have enough of to finish it off.  I'm hoping it might be donation sized in the end (50x70) but it's looking a bit short for that.  In any case, I'll probably give it away somewhere, because 4 years later the colours just don't speak to me the way they did when I bought the fabric.